What Does the Refrigerant Phaseout Mean for Me? 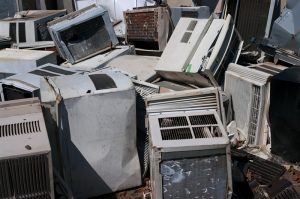 Many homeowners really take their air conditioning systems for granted, expecting that they’ll just always be there for them when the temperature starts to rise. Now, we’re not suggesting that you start to vocalize your appreciation for all it does to your air conditioner directly. However, we do suggest that you try to establish a baseline knowledge of how your air conditioner operates. This can help you to understand why problems develop, and what something like the upcoming refrigerant phaseout means for you and your system.

You have probably at least heard the term “refrigerant” before, though you may not totally understand just what it does in your air conditioning system. In truth, it plays one of the most vital roles in the whole cooling process. Refrigerant is actually an umbrella term covering many different heat transfer fluids used in HVAC systems. One of the most common — and the one being phased out — is R-22. What does that mean for your AC in Vail, AZ?

Why Is This Refrigerant Being Phased Out?

R-22 refrigerant is a compound that belongs to a notorious clan of substances called hydrochlorofluorocarbons — often (and helpfully) referred to simply as HCFCs. HCFCs deplete the ozone layer, which is a problem considering the fact that refrigerant leaks are among the most common of all air conditioning problems. It also becomes a problem when a homeowner simply wants to dispose of an old air conditioning system.

So What Is Happening with My System?

There is not an HCFC task force that is going to come to your home and snatch your air conditioner up from the slab that it sits upon. However, the phaseout of R-22 does mean that those air conditioners currently using it may run into trouble if they have to be recharged due to leaks. Many companies are not able to bring in as much R-22 as they used to, prices will likely continue to climb, and demand will increase.

The new production of most HCFCs, as well as the simple importation of R-22, is going to be phased out entirely by 2020. That is obviously just a few years off now. What this means is that, if you are looking for a new air conditioner, skip any model that you may find which utilizes R-22 in its operation. Look for an R410-A model instead. There is no point in investing in equipment that is going to become obsolete in a short stretch of time.

If you do require a recharge for your air conditioning system, you should not wait to have the job completed. No, R-22 is not going to simply vanish overnight. With the phaseout looming in the relatively near future, though, its days of ready availability are limited.

Qualities to Look for in Commercial HVAC Repair Services

During a long, hot summer in Southern Arizona, a powerful air conditioner is essential for the success of any business. With the amount of strain that you will place on your company’s AC during the summer months, you need to have the number of an excellent Tucson, AZ commercial HVAC repair service handy should something go wrong with your cooling. You’ll also need to keep them in mind for the rest of the year, should you also need work for your heater. But what separates a good commercial H...

The temperature around here during the daytime hours is still pretty warm, although, at night, things are getting noticeably cooler. Sure, we’re hanging around the mid-60’s for the most part right now, but it won’t be long before temps in the 50’s, and even the 40’s, are commonplace. Our mild winters do not mean that you can overlook the need for professional heating maintenance in Phoenix, AZ. Before our nights get any colder, you should dial our number and schedule routine heating m...

There are a lot of different components in your home cooling system, but not a single one do you interact with more directly than your thermostat. It is your thermostat, after all, through which you communicate with your air conditioning system in order to regulate its performance. Because of this, it is absolutely necessary to ensure that you are using your thermostat in Phoenix, AZ as successfully as possible. While you may not think of a thermostat as being very complex, the fact of the matte...

Born in the Southwest and quickly growing to provide Goettlized home environments throughout the nation.