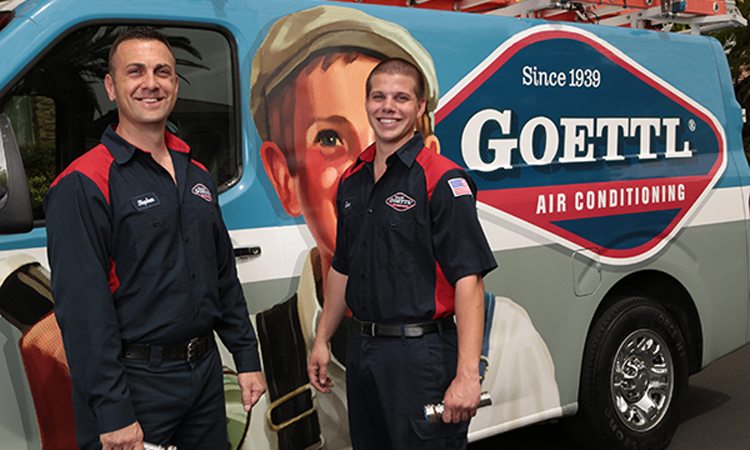 In 1939, the U.S. was emerging from the Depression and some 65,000 people called the small desert city of Phoenix home. At the time, the region’s economy revolved around the copper, cotton, citrus and cattle industries. The city was also quickly gaining a national reputation as a sought-after destination and winter tourism began to flourish. And internationally, threats of war loomed to change history.

Amid this intriguing backdrop, a pair of brothers from Austria moved to Phoenix. Gust and Adam Goettl had a vision to establish a company that could make the intense desert heat a livable environment. The pair would establish Goettl Air Conditioning on Feb. 14, 1939 and revolutionize cooled air technology paving the way for a population boom in the emerging Southwest.

As demand grew for their product, the Goettl brothers would pioneer sheet metal manufacturing and hone the process to a science – at one point the brothers had more than 100 patents on their technology. Soon, however, World War II would change the world’s landscape and the brothers were quick to shift their manufacturing operations to support the war and the need for metal-related products.

In fact, Phoenix would begin to establish itself as a military industrial center with three air force fields – Luke, Williams and Falcon Field – training and supporting soldiers from around the U.S. These facilities would join the Desert Training Center created by General George S. Patton, which would bring thousands of military men and women to the desert to train and support war efforts.

The Phoenix Rise: If It’s Made of Metal, Call Goettl™

While all of this was occurring, air conditioning made the environment livable. The prevalence of air conditioning in homes and offices, made the state attractive to businesses, tourist, retirees and those seeking refuge from bitter winters in the Midwest and along the East Coast. By the 1950s, the use of cooled air technology would spur a growth boom that continues today. By 1960, Phoenix grew more in a year than it did in from statehood in 1914 to the end of World War II.

Since this series of linked events, the Goettl name has been recognized for excellence in heating and air conditioning installation. A consumer-focused brand, the Goettl name and reputation continued to grow. The term “Goettl” was soon used to epitomize strength, power and longevity as a source of hospitality in the searing and relentless desert heat.

The Goettl brothers would also pioneer marketing of their product. Since most didn’t understand how the technology could work to cool their homes, the brothers would strap air conditioning units on trucks and drive around town blasting cool air on the porches of residents, tempting them with the refreshing, breezy air. Once the wondrous cool air reached the faces of families trying to survive the desert heat, it was a done deal and Goettl would soon be a household name.

“We are truly honored to carry on the well-known legacy of the Goettl brand,” said Ken Goodrich, CEO and owner of Goettl Air Conditioning. “The Goettl brothers invented the industry and created an innovative and well-respected brand. Today, the ‘Goettl workhorse’ is well-known and continues to be cited in awe by industry peers.”

Goodrich, whose father, J. Duncan Goodrich, was an HVAC expert himself, would join his dad on jobs as a child where he would hold a flashlight to help complete jobs in Las Vegas during hot, dark nights. The experience would lead Goodrich to use the image of his own son, Duncan, in his marketing holding a flashlight illuminating the right way to complete HVAC jobs. It was during these jobs that the younger Goodrich would begin to admire the Goettl brand for its “iron-horse” longevity and integrity in the industry.

Later, when Ken Goodrich established his own HVAC company, Goettl was the only brand willing to extend him credit to nurture his business. Goodrich would continue to build his HVAC businesses, but he would never forget the Goettl brand.

By 2013, the economic recession and a hyper-competitive industry, had taken its toll on Goettl in Arizona. Ownership changes threatened to kill the Goettl brand.

Enter Goodrich, an air conditioning industry executive who has bought and sold several HVAC companies around the U.S. In 2013, he took control of Goettl and immediately installed new management and systems to manage the company. Soon, Goettl Air Conditioning went from hemorrhaging millions of dollars a year to being a profitable, industry pioneer yet again. Soon, Goodrich would start expanding Goettl Air Conditioning throughout the Southwest while resurrecting the brand and ideals that shaped the company.

Class Is In: Goettl University

Later this year, the Goettl name will be elevated to new heights when Goodrich opens a new Las Vegas headquarters, which will include “Goettl University.”

Besides housing 200 employees of Goettl Air Conditioning, the 53,000-square-foot Las Vegas facility will also have the region’s largest state-of-the-art training center: Goettl University. The facility will include a 100-seat customer service center and mock HVAC systems built into the complex for realistic hands-on training and learning.

“This facility and Goettl University will fulfill a life-long dream of mine where HVAC technicians throughout the U.S. will be trained the Goettl way,” said Goodrich, who will continue to transform the industry and maintain the commitment to quality and doing the right thing for consumers. “Our technicians will receive ongoing real-life training and will be taught to be perfectionists – just like my father trained me. Every customer experience, every screw and bolt we install and every detail in the process will be best in class. Perfection will be our guide.”

Qualities to Look for in Commercial HVAC Repair Services

During a long, hot summer in Southern Arizona, a powerful air conditioner is essential for the success of any business. With the amount of strain that you will place on your company’s AC during the summer months, you need to have the number of an excellent Tucson, AZ commercial HVAC repair service handy should something go wrong with your cooling. You’ll also need to keep them in mind for the rest of the year, should you also need work for your heater. But what separates a good commercial H...

The temperature around here during the daytime hours is still pretty warm, although, at night, things are getting noticeably cooler. Sure, we’re hanging around the mid-60’s for the most part right now, but it won’t be long before temps in the 50’s, and even the 40’s, are commonplace. Our mild winters do not mean that you can overlook the need for professional heating maintenance in Phoenix, AZ. Before our nights get any colder, you should dial our number and schedule routine heating m...

There are a lot of different components in your home cooling system, but not a single one do you interact with more directly than your thermostat. It is your thermostat, after all, through which you communicate with your air conditioning system in order to regulate its performance. Because of this, it is absolutely necessary to ensure that you are using your thermostat in Phoenix, AZ as successfully as possible. While you may not think of a thermostat as being very complex, the fact of the matte...

Born in the Southwest and quickly growing to provide Goettlized home environments throughout the nation.