Ken Goodrich saw the usual signs of a business in need of a rescue: no profits, mostly losses and poor morale. 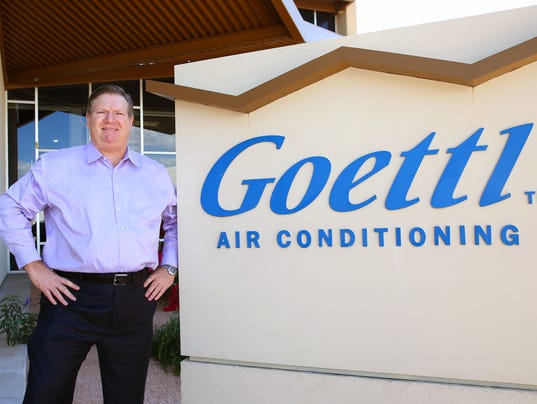 Buying broken businesses and fixing them had been Ken Goodrich’s specialty for years. By the time he purchased Goettl Air Conditioning in 2013, he had done that 15 times.

The once family-run company that was founded by brothers Gust and Adam Goettl changed ownership hands several times over the years. When Goodrich purchased it from the large out-of-state company that had owned it for five years, Goodrich saw the usual signs of a business in need of a rescue: no profits, mostly losses and poor morale.

The former ownership had been cited by the attorney general for questionable business practices, Goodrich said. The legal matter was settled, but the public-perception scars remained.

“Consumer confidence and the legal issues: That was something I never experienced before in terms of fixing a broken business,” Goodrich said of the new territory he was in.

Goodrich approached this new problem the old-fashioned way. He focused on building morale within the company. He did that by emphasizing the needs of customers and employees’ roles in that process.

He incorporated daily conversations with employees about making positive impact on customers, other team members and the industry overall. They established charitable initiatives, such as an annual drive that delivers more than 50,000 cases of water during the summer to the homeless, and rallying around veterans’ initiatives.

Goodrich also got Goettl involved in the community. A recent example: Goettl installed for free a new unit and ducting in the home of an elderly woman in Chandler who had been coping with an aged swamp cooler for the past 20 summers.

With the company culture rebuilt on a positive cornerstone, Goodrich saw the rest come together. Employees were motivated and excited to take service from the heavy lifting of installation and repairs to interactions with clients to a higher level.

From there, Goettl was built back up one customer at a time. Since the ownership change, Goettl has grown more than 500 percent, Goodrich said. It has expanded into Tucson, Las Vegas and Southern California and generates in excess of $50 million in annual revenue, he said.

Stiff competition and a customer-first strategy

The business of keeping people cool or warm, depending on the season and part of the country, has become a crucial and big one. More than three-quarters of all homes in the United States have air-conditioners, according to the U.S. Department of Energy. Globally, the air-conditioning systems market is projected to be a more than $167 billion industry by 2024, according to the firm Transparency Market Research.

Competition is intense. Goodrich’s customer-first strategy may not be new, but it’s effective.

Goettl replaced Randy Pullen’s unit in 2016, and also evaluated his Phoenix home and broke it into cooling areas where little-used rooms don’t get cooled down. This has amounted to savings, Pullen said.

It was the second unit that Goettl had installed for Pullen. The first was a brand that the company was considering carrying; it gave Pullen a nice offer to replace his old unit with this one to see how it worked. After three years, Goettl decided not to carry it and replaced it with a Carrier last year.

Pullen said all of the technicians have been professional, and he has been pleased with the service. He said they take photos and send them to Goodrich, so they know he is looking at the equipment and work. Everyone has showed up on time and the jobs have ended on time without overcharging.

“It goes back to the way Ken does business. He’s very customer-oriented and it comes from the top,” said Pullen, who met Goodrich through a business contact in 2011. “They do what they say their going to do, and they deliver.”

“People are proud to be part of Goettl”

Goodrich’s history with Goettl goes back much further than his four-year ownership.

He was 10 growing up in Las Vegas, where his father owned an air-conditioning company. One night, he had the chance to work with his dad on a job. His father asked him to hold a flashlight so he could see what he was doing. This instilled Goodrich’s interest and passion for the industry.

Incidentally, that flashlight shone on the first air-conditioner Goodrich saw up close. It was a Goettl — the brand that his father’s company specialized in. Goettl stopped making the units in 2007.

This inspired the radio ads that tout Goettl, the company today. Goodrich had replicas made of the old-style silver heavy-duty flashlights to give out to community members. 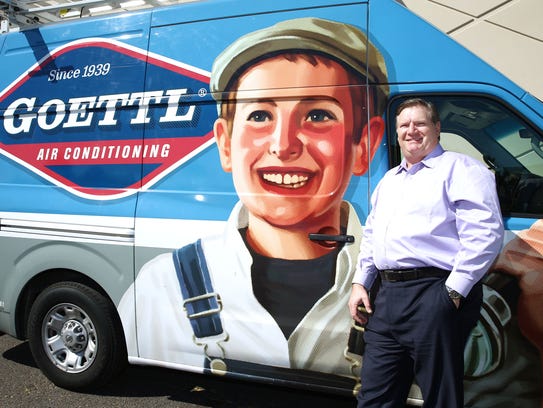 Ken Goodrich President and CEO of Goettl Air Conditioning on Mar. 28, 2017 in Tempe. Goodrich was first exposed to the company as a kid through his dad’s work in the air conditioning industry. (Photo: Rob Schumacher/The Republic)

As Goodrich grew up, the air-conditioning company remained a big part of his and his family’s lives. Goodrich was 25 when his father died and left him in charge of the family business. Goettl was the only company that was willing to extend credit to the young, rookie owner thrust into business ownership.

“(Their) comment was, ‘We know you can do it,’” Goodrich recalled. “Without Goettl, we would not have been able to keep the family business going.”

Fast forward decades later to when the opportunity arose to purchase the company, he credited with keeping his father’s legacy going. Goodrich jumped at it.

“I am so proud to own Goettl because it meant so much to me. I know it’s heritage and quality products that have helped allow millions of people to live in this severe desert climate,” he said. “People are proud to be part of Goettl and what we’re doing.”

Interesting stat: 86 percent of American households have air-conditioning, according to the U.S. Department of Energy.